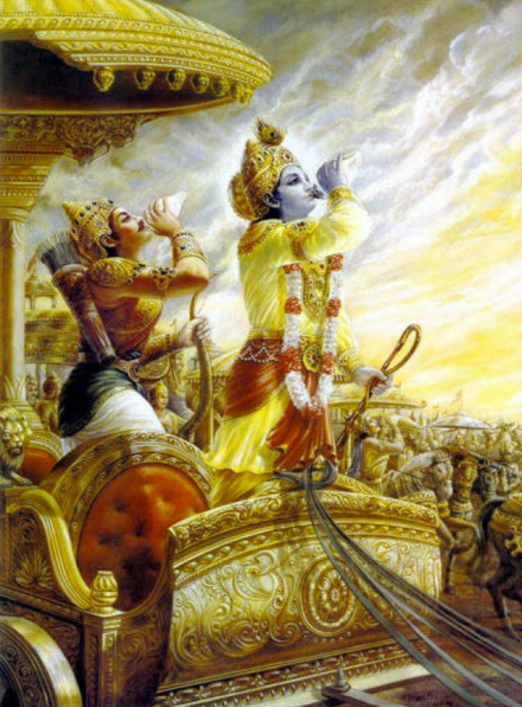 The Power of God & You

The manifestations of God in the world, in you, and in the entire universe.

The eighteen chapters of the Bhagavad Gita is a conversation between Arjuna and his childhood friend and Guru, Lord Krishna. Arjuna has asked Him to explain how He, as Absolute God, exists within Creation (beginning with verses 19-20, “God in You”):

36
Of gamblers I am the risk, and of the noble I am their efficacy. I am the victory of the determined, and the purity and goodness of the resolute.

There are several ways to translate this verse. To keep it down to one, I am using what is most applicable to my own sadhana.

Of gamblers I am the risk. This works for me because I understand from the Mahabharata that the good guys, the Pandavas, were involved in gambling. This kind of behavior is usually looked down on by the religious, but there is a special meaning here:

The Pandavas, Arjuna’s people, were urged over and over again by Lord Krishna Himself, to take up this ‘battle’. He advised this for the purpose of regaining their throne, their inheritance, so they finally acquiesced and surrendered to Lord Krishna and accepted his guidance.

This also applies to us. We have lost our throne, our authority over our own selves and our own lives. Taking a chance and surrendering to Absolute God/Truth will reverse this situation and bring you into your inheritance. Surrender to a God you don’t know yet may seem like a risk, but one takes this risk on faith in order to achieve victory. The end result is union (yoga) with That.

Of the noble, I am their efficacy. Making the choice to engage in this battle and put God in the driver’s seat as Arjuna did, literally, is a noble act that leads to victory. Lord Krishna is saying that He is the effectiveness resulting from Arjuna’s having made this choice.

I am the victory of the determined, and the purity and goodness of the resolute. This tells us that, with resolute determination we will achieve victory, and all that is good and true.

37
Of the Vrishnis, I am Vasudeva. Of the sons of Pandu, I am the Conqueror of Wealth. Of the munis, I am Vyasa, and of poets, I am Ushana.

Of the Sons of Pandu. The Pandus, Arjuna’s people, are risker-takers. Not only is getting involved in a war a risk, but it all started with Arjuna’s brother gambling with the enemy and losing everything. Lord Krishna is addressing Arjuna as Dhanañjaya, which means ‘winner of wealth’. He is letting Arjuna know that he can expect success. What this means then, is that we can expect success in this facet of our own practice.

What facet is this? Awakening the sleeping evolutionary force (kundalini) so that we can retake our inheritance as sovereign Self-knowing lords by defeating the enemy represented as the Kurus, the ‘doers’. In other words, we will come to accept ourselves as sovereign non-doing divine individuals, knowing that all action occurs in nature, and what we really is not nature and does nothing.

Of the Munis. A muni is a saint, sage, devotee or hermit, a Brahman (God-person) of the highest order. Krishna is saying that of munis, He is Vyasa.

Now remember that it is Vyasa, the Sage, who is writing this conversation between Krishna (God) and Arjuna (you). Once again he inserts himself into the plot, this time as the greatest of munis, Lord Krishna Himself.

I suspect that there have been many authors called Vyasa (‘compiler and arranger’), but this one has a unique signature: his sense of humor finds it way into the text as he puts himself into the plot.

Of Poets, Ushana. The keepers of spiritual knowledge were sages who were poets and bards. This not only preserved knowledge, but protected it from corruption. Teachings like this Bhagavad Gita (‘God’s Song’), were preserved in rhythmic verse and meter, making them almost impossible to be tampered with or lost, but easy to remember. These poet-sages were very advanced and enlightened yogis who understood what they were chanting and preserving. Krishna is saying that of these poets he is Ushana, the poet most ‘zealous and impassioned’.

The other device for preserving teachings was sutras, the use of short phrases, or even single words, which were memorized and used as cues for the remembrance of the associated teachings. One famous example is the Yoga Sutras of the sage Patanjali. Many read these sutras and expect that they are the teachings, but this is not so. They are bell-ringers meant to stimulate the memory of the mysteries they hold, many of which are only orally communicated. Perhaps we will take up the Yoga Sutras once we complete the Bhagavad Gita.

Namaste (I bow to the divine one you really are),
Durga Ma
durgama.com

The most effective form of Spiritual Development always has two parts:  Real Meditation and Practices for daily living.

Replace effort with experience.
Don’t DO meditation, EXPERIENCE it with shaktipat.

As your True Self emerges, your Life becomes more satisfying, and the Lives of others are benefited. As you become Happier, the world becomes a Happier place.

Every step you take pulls every one of us with you—we ride the slipstream of your spiritual progress.

The Whole World is One Family