The Bhagavad Gita appears in the story of the Mahabharata. It is a conversation between Lord Krishna and his devotee and childhood friend, Arjuna. Listening in, we receive the teachings of Lord Krishna as he relates them to Arjuna.

The subject of this chapter is Devotion.

1
Arjuna spoke:
Of those who are constantly engaged in worshipping You, and those who worship the Imperishable Absolute, which of these has the best knowledge of Yoga?

“You” is Lord Krishna, an incarnation of God. Embodied and in visible form, He is Personal God. The “Imperishable Absolute” however, being non-manifest and imperceptible, is Impersonal God. Arjuna wonders which best knows Yoga. 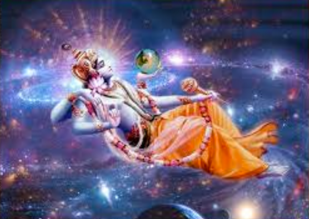 There have long been discussions on the idea of God as Personal. This is prevalent in the West in Christianity. Impersonal God on the other hand, is abstract and mostly referred to as Truth or The Absolute, etc.

There is nothing abstract about Jesus, but “the Father”? That’s a little abstract, but only because we can’t get a good look at Him. In the East, this entity is called Purushottama, meaning first and highest God, and is also considered male.

Purushottama, the first Divine Individual in the Absolute to know and unconditionally accept all other Divine Individuals as the same, is considered male.  Everything that is other than Purusha that Purusha can be conscious of, is called Prakritti, and considered female. So here we have God as both male and female.

From Purushottama we extract the word Purusha. Purusha, a Divine Individual with a viewpoint, seems to have been arbitrarily assigned male status even though, in the Absolute, one would not be either male or female. Prakritti is all the other individuals in the Absolute — nothing else, because there isn’t anything else.

Now let’s say there is something happening because of all this knowing of Others. What is happening is called Creation. And it all began because of (but not by) the first One, Purushottama. Now we have a world and people and things and we wonder where it all came from, and what it’s for, and why.

We are living lives as human beings, and as we look out on Creation we see Otherness as people and things that are different from ourselves and call it Nature. Prakritti, Divine Otherness, gets the dubious title of “Mother Nature”, and “God” is institutionalized as “Him”.

The word Purusha has long sense become used as a term meaning ‘a man’ in general. Purushottama is known as the god Vishnu, a male, whose avatar is Krishna, also male. Personal God is also “the Father” whose son is Jesus, also male. We have now taken this assigned gender for one’s own viewpoint to mean a man, a human male, who is thus Superior. What is viewed by Purusha is secondary to Purusha, an illusion, and female. But really, is the viewpoint superior to the view?

One wonders how it would be if someone took the time to rewrite everything and switch genders. Then how would we look at things, the world, and God? God and Vishnu would be female. I was told by my guru that in the very distant past, this was indeed the case: Vishnu was a woman, God was female, and with the descent into the present age, Personal God became male. He then charged me to do my part in turning this around and to “Bring back the worship of the Goddess.”

Some of us don’t like the idea of some old guy with a beard and a staff hanging out in a corner of the universe directing traffic. It’s just too absurd. But that’s where the idea of a Personal God has taken many of us because of our religious associations.

Of those who, as children, picked up this idea of God, many eventually left religion and rejected God altogether. Some though, discovered another way of understanding that God might really mean Truth in the Absolute sense. They became involved in more peripheral religious groups who postulated this idea.

Others like myself just got so mad at God for all the trouble and suffering in the world (including mine), and ranted at Him for doing such a lousy job with His traffic gig. I liked the idea of Personal God if He would just get His act together, but that didn’t happen, so I left. For about ten years, I drowned my sorrows and tried my best to figure everything out on my own. Those ten years, while everyone else was partying and having a good time, were the worst years of my ‘adult’ life.

Near the end of all of this, I had a visitation from an Immortal and everything changed. Instantly. I was driven to search for a “spiritual master” to teach me, and eventually found Kripalu. (At this point I had never heard of Yoga.) I couldn’t speak Gujarati so I studied with his disciple, Yogeshwar Muni, who had formerly been a scientist. This greatly appealed to me — no woo-woo nonsense here!

This changed my perspective drastically to one that embraced both the personal and the impersonal: God and Truth, one God and many gods, and even more beautiful paradoxes.

Approaching Impersonal God can open doors you couldn’t otherwise jar loose with a hammer. Behind these doors are answers to questions you haven’t even thought of yet, but you will think of them when the answer is starring you in the face (once you have opened the door to the Impersonal). On the other hand, it feels really good to have a personal God. So why limit yourself to one or the other? I enthusiastically recommend both.

In our next post we will consider how to go about this.

Namaste (I bow to the divine one you really are),
Durga Ma
durgama.com

Become a “Spiritual Leader” who knows the science of meditation and yoga, and the path to liberation and endless happiness.

Life Mastery
Synchronize yourself and your life with your naturally divine characteristics, and the Real You emerges. Attain and maintain success and happiness.

Every step you take pulls every one of us with you.
JOIN THE MISSION