Abandon all dharmas and take refuge in Me alone, and I will give you freedom from all misfortunes. Grieve not. — Shloka 66

Alternate translation:
Abandon all ‘shoulds’ and surrender only to Me, and I will give you liberation and the end of all sorrows. Fear not!

1.  Austerity (tapas) is the purification process brought about by yoga; the melting away of impurities, including one’s karma.

Tapas, usually translated as ‘austerity’, means ‘to burn, heat, melt or warm’. Tapas is brought about by yoga (union) for the purpose of burning away impurities, and putting things not in sync with God and the Real You where they belong. This applies to body, feelings, mind and karma.

2. Devotion and seva exemplify love and respect for the guru.

Devotion (bhakti, ‘love, respect, commitment’) is love and commitment to God, and the performance of guru seva.

Seva is selfless service, service without expectation of return benefits.

Guru’s Grace refers to receiving the initiations of the guru’s lineage. To the degree that one is devoted to guru and performs seva, one gets Guru’s Grace. Seva diminishes one’s karma and protects the guru and the guru’s oral teachings.

3. Study and practice refers to learning and putting the knowledge gained into practice on a regular basis.

Study means learning through the study of scriptures, the words of the Guru, and contemplation of scripture and the guru’s teachings. Study also refers to the study of oneself and one’s Self with self-honesty.

Practice is putting the knowledge gained through Study into action. The form this takes is determined by the Guru. Different gurus have different practices, all of which include meditation.

Protection refers to both the teachings and the guru. “Love Me and protect the teaching.” If you love God you also love everyone, and will therefore protect this secret from misunderstandings and misuse in order to protect them. This is achieved by abiding by the requirements.

Now that Lord Krishna has given Arjuna the meaning of the Diamond Shloka (verse 66 above), He tells him to keep it secret. But we have just read it! What can this mean?

A secret is something that is not understood.

Now, having heard this secret, we can’t help wondering if we have missed something. Unless we can honestly say that we fit the above requirements ourselves, we will have missed it, and its meaning will remain hidden to us until we do. When we do meet these requirements, we will come to understand it.

Abandon all ‘shoulds’ and surrender only to Me, and I will give you liberation and the end of sorrows. Fear not! — Shloka 66 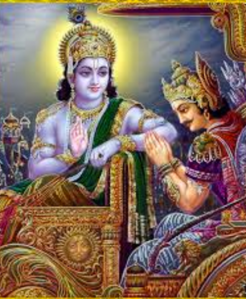 After all this hoo-hah about keeping this teaching a secret, He is telling Arjuna that teaching it is the biggest way to His heart! He says that “he who teaches this supreme secret to My devotees performs the highest act of devotion to Me.” He has even given Arjuna the standards for determining devotees who are qualified to received it (verse 67).

Once again we are faced with a paradox. If this teaching is secret, how can it be written down for anyone to read? Obviously it is written in such a way that only someone who has met the above criteria will be able to understand it. So have another look at these requirements, and decide for yourself how close you are to meeting them.

In these verses, Lord Krishna is also revealing the power of teaching as a part of one’s sadhana. Once one has reached the stage in which he or she has received this teaching and gained adequate experience, the guru may appoint them to teach others.

The best way to learn is to teach.

Such a devotee will ultimately become a teacher of the guru’s lineage and find themself in the Heart of God:

70-71
And one who hears this sacred teaching with faith, by that one I am loved with the Knowledge Sacrifice. It is certain that, free of ill-will and scoffing, the man who assimilates this knowledge is liberated and reaches the auspicious worlds of the righteous.

“The man” Though we usually see the word purusha to indicate a male person, here the word is nara, indicating a person who has reached an advanced stage of Yoga. This tells us that this stage is fundamental to the requirements for receiving the secret.

“Assimilates” Takes it in, understands and internalizes it.

“Without ill-will or scoffing” This is mentioned to point out the reaction of someone who hears this secret without meeting the four Requirements mentioned above. Unable to understand it, he may ridicule it and causing harm to those he tells. This further emphasizes the need to protect it in order to protect others from the harm caused by misunderstanding and derision.

“Liberated” Free. By using the word mukti instead of moksha, he is saying that, , even though one is liberated from the cycles of death and rebirth, this liberation is not the final liberation. This suggests that there are stages of liberation and other realms of which we may be unaware.

“The righteous” ‘Those whose actions are pure’; auspicious skill in action; virtuous, pious’.

I have translated these last two verses (70-71) as the culmination of the teachings concerning the Diamond Shloka. In the next post, these same two verses will reveal another layer of intrigue, and become the prelude to the final verses of this chapter.