Previously, it was the Greatest Secret that was the subject of verses 70-71. In this translation however, it is the entire Gita that is the subject:

70-71
And one who studies this sacred dialogue of ours, by that one I am loved with the Knowledge Sacrifice. One who is faithful and void of ill-will and hears it, certainly becomes liberated and attains the auspicious and happy worlds of the righteous.

Vyasa, the author of the Mahabharata, which includes this Bhagavad Gita, is speaking as Lord Krishna as if He were aware that, many years in the future, there would be people like us reading this Gita and needing to know that we have not been left behind by the passage of time. Truth never changes. The Greatest Secret of the Diamond Shloka, and the entire Bhagavad Gita, are as great and true now as they ever were. And if we proceed with Faith, rather than questioning it, we can become liberated and attain “the auspicious and happy worlds of the righteous.”

One who is faithful and void of ill-will refers to the yogi who has studied this dialogue and has learned this Great Secret directly from the mouth of his guru, just as Arjuna has. At death, even if he has not yet mastered it, he may nevertheless become liberated and attain the happy and auspicious world of those who have.

72
Have you heard me with concentrated mind, Arjuna? Have your ignorance and delusion been destroyed, O Winner of Victory?

73
Arjuna spoke:
Infallible One, by your Grace, my confusion is gone and memory regained. Unchanging One, I stand with doubt dispelled, and I shall do whatever you say.

In the beginning of the Gita, Arjuna spent the first chapter railing at the idea of engaging in this battle, but now that he understands what is really going on, he is inspired and committed to follow his guru’s promptings.

Now we hear from Samjaya, minister to the present king, who has been narrating all this to him (and us):

74
Samjaya speaks:
Thus have I heard this dialogue between Krishna, the Son of Vasudeva, and Arjuna, the noble hearted son of Pritha, so glorious that my hair is standing on end. 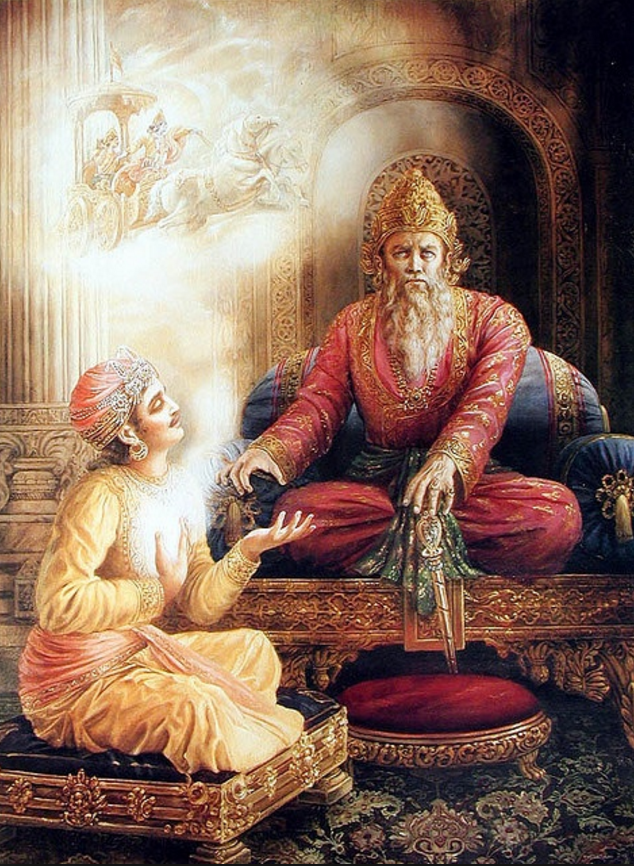 Samjaya is the blind king’s minister. He is narrating to him this dialogue between Lord Krishna and Arjuna as we listen in. Samjaya (‘victorious’) is using his power of divine sight to perceive it from afar, where Krishna and Arjuna are standing between the two armies before the battle begins. He has heard the key teaching of the Diamond Shloka and has discovered that, by having heard and understood it, it can propel him directly to liberation, and he is electrified by the prospect.

75
By the grace of Vyasa, I have heard this supreme and holy secret of Yoga from Shri Krishna, speaking directly, before my very eyes.

Samjaya is saying that he has heard this supreme secret of Yoga directly from the Lord of Yoga himself, Lord Krishna. And that it is by the grace of Vyasa, who is the author of this story, that he has been able to do so. He goes on to say…..

Samjaya did not miss the part where Lord Krishna said that one who is faithful and void of ill-will and hears this, also becomes liberated and attains auspicious and happy worlds. So he is filled not only by the wonder of the whole conversation, but also, by having learned this Great Secret, that he, too, will be liberated and find Eternal Happiness.

The astonishing and wonderful form of Lord Krishna refers to Krishna’s Cosmic Form in chapter eleven.

78
Where there is Krishna, Lord of Yoga, and where there is Arjuna, the Great Archer, there will also be honor, success, prosperity and unending Goodness. Of this I am certain.

Krishna, who represents God and Guru, knows Yoga (uniting). Arjuna, a warrior, represents the disciple who is brave in the midst of much as yet unproven, and seemingly risky, undertakings. But he only needed this guidance from Lord Krishna to go forward no matter what. This is the definition of ‘discipline’. By such discipline, he is certain to reach the Highest Goal — by the Highest Knowledge, the Highest Action, and the Highest Devotion. And so can you.

Read “The Exquisite Beauty of Surrender Yoga“ and receive a gift from me to you.