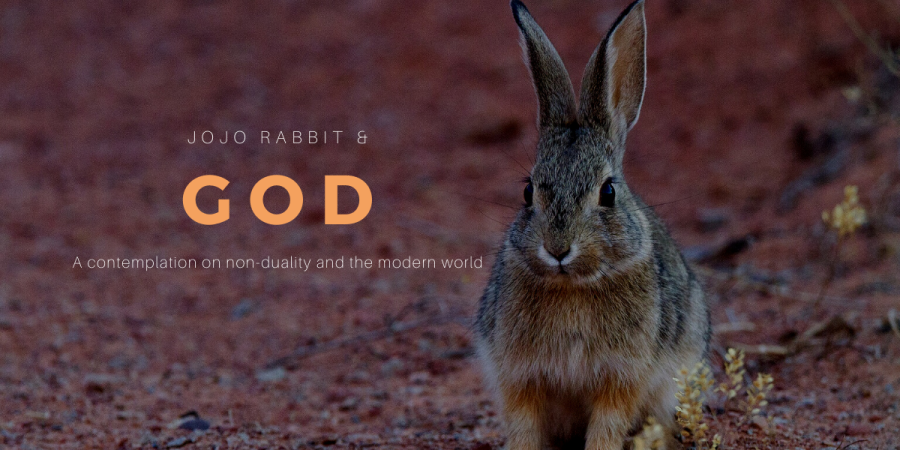 I apologize in advance for anyone that this may offend. It is not my usual approach to writing here, but it is at the forefront of my mind.

In an effort to continue the weekly postings on Mystical Tidbits and the evolution of Durga Ma’s work, I found myself in a pickle. She had the gift of the shastras. Every morning Durga Ma would study scripture, translate sanskrit and write commentary that became the wealth of knowledge that you find here.

My gifts are, well… unusual and undecided at this point. But we do share the sincere desire for people to become inspired to act, to wake-up, and to seek Truth. I want to write about the beauty and glory of Truth, but sometimes that comes in a less than desirable package. So here we go…

Yesterday I went with some friends to see JoJo Rabbit. Probably not what most people expect a yogi to do, but I love a good film and a controversial topic to sink my teeth into for contemplation. 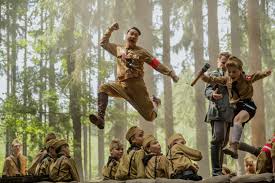 This is the aim of the yogi. To realize, to make real the truth that there is none other in existence than One/God/Truth/Divine through the process of unbecoming everything else to the final dawning of pure consciousness. We give our lives and efforts to the path of Self-Realization for the purpose of liberation from suffering and ultimately, the suffering of the world.

So sitting in a theatre watching real documented footage of people pining to touch Adolf Hitler was a challenge. The heart is a fickle thing, just like the mind, and just like the human self. It’s a lot easier to move into a transcended state of consciousness when I am alone, or with people I get along with, or while teaching. But how does enlightenment stack up when we are face to face with a phenomenon like Adlof Hitler?

There is a reason yogi’s go to caves and live in solitude. That is not my path this time around, so here I am in the world… seeking Truth with unceasing devotion and increasing fervor, while in a movie theatre watching a young boy in Nazi Germany negotiating a very real situation.

You should know that everything becomes a contemplation of Truth in my world, and on my way home I found myself swept away reflecting on the condition of our modern world in relationship to the striking similarities of those in JoJo Rabbit.

I can’t help but think of my own child, nearly 8 years old, and other children… leading ultimately to the world which, in a not so distant past was in the middle of WWII. I thought of the coincidence that this film is out now, during an administration that is arguably in place through the efforts of preying on people’s fear. We live in a world that is at war with itself on more than one level, fueled largely by the fear of what we do not know and do not understand, and are too afraid to confront honestly.

But perhaps the most significant thought which arose, is that it takes something as catastrophic as the Holocaust to awaken the human heart. While only a few decades to forget, and for some to deny all together.

More often than not it is the pain of suffering, and the loss of all hope that brings a human to the level of humility needed to finally open to real love. A fundamental desire of the human experience, and a necessity for survival that seems to persist in the modern world more as a threat than as an accessible reality.

By this point in my contemplation the tears were streaming uncontrollably and I felt the overwhelming suffering that is our collective ignorance. Between the sobs I looked for a way out that would satisfy the mind’s desire to confirm that all is THAT, and to release me from the grip of witnessing the power of fear. Fear for my son, for the world, for my self,  of being gobbled up in the illusion of feeling powerless, peppered with unwillingness to do differently, to do better.

But it didn’t come. Because the mind can’t give you freedom. True freedom comes from the heart.

Truth sometimes comes in a tear-drenched, snot-filled realization that our greatest power is in our capacity to love. Our ability to remain vulnerable to an exploration of self, without the premature transcendence into the “thought” that everything is perfect just as it is. That pivotal point where we give up out of cowardice or misunderstanding and pretend that it’s ok. We must go beyond the limits of where we feel comfortable and be willing to dip into a deeper reservoir of our reality.

What is waiting in the darkest recesses of the heart? Truth.

Everything is THAT, pure and perfect omnipotent one-ness of Divinity.

What is required of us to embody that reality is the dedication and commitment to realizing it. We do better by being willing to encounter ourselves with self-honesty, and others with less judgement and more acceptance. We exercise our power by choosing not to empower fear, or to condone violence as an excuse for it.

Durga Ma told me (on more than one occasion)

“The greatest gift you can give the world is your own awakening.”

So this experience became a reminder of personal revelation and the importance of remaining available to the infinite manifestations of love (which sometimes is nothing more than fear parading as a boundary of our true potential), as well as a personal recommendation for a tremendous film. A captivating journey, which, I think beautifully captured the essence of the human heart to rescue us from the perils of our own misunderstanding. The world is inherently unstable by nature and constantly reinventing itself in the reflection of the inhabitants who best capture our attention, so we should take great care in where we place ours.

It also served as a reminder of why I continue my practice and my work. We are far from free and all we have is time, so the question is… how will you spend yours?

1008 Pranams to Durga Ma and all the Masters who have gone before in the quest of Knowledge and Truth, who have left a blazing trail to follow. My many heartfelt thanks to you who read this all the way through an entertained my otherwise child-like fascination of finding Truth through experiencing life in the world.

My deepest heartfelt gratitude to Taika Waititi and all of the people and efforts that brought this film to life. It was an important act of courage and an incredible use of creative vision and skill, blended with the perfect amount of levity to an otherwise heavy subject. May we all learn from the grace of those who are willing to confront the dimensions of humanity that threaten freedom when left unattended.